It’s been around barely two years but your current Amazon Echo is being updated.  Welcome the ‘Echo Show’.  The what now?  Yes, Echo now comes with a screen and is being released in the US in June.

It could be argued that this is just a fancy tablet, and that if the Echo is meant to be voice controlled, why would one need a screen?  A screen would simply add more functionality.  Think of all the cat photos you can look at while never having to type a single keystroke! Of course, there are more sensible options, weather, time, videos and the like.

Personally, I like the idea.  I have three Echos in the house already, but one with a screen would be useful, especially in the kitchen which is usually the ‘hub’ of any house.  Yes, I have an iPad that I bring into the kitchen for recipes or watching the news while I cook but I like the idea of a screen on a wall that’s voice activated.

There’s still room for improvement – at the moment, the Echo is still a one user device – it won’t work with multiple calendars for example but the good thing is the Echo has always been open for expansion and improvement.  Skills can be written and added just like your apps on a smart phone or tablet.  I’m looking forward to its release and seeing where Amazon take this device next!  Wired’s article on the Echo Show is worth a read.

Graphene: it’s the world’s thinnest material and the most conductive. It’s been studied since the 1940s and over time, a number practical uses and loads of potential ones have been discovered.

Well, now it has another, potentially HUGE use.  The filtering of sea-water to produce drinking water.

A mesh of graphene is used to filter out the salt, letting pure water through.  Until recently, the holes in the membrane were not small enough to stop all the salts from getting through.  Now scientists found a way around this.  The potential is huge if they can replicate it on a large-scale outside of the lab.

Many places in the world experience regular drought conditions. In fact, the UN predicts that by 2025, 14% of the world’s population will experience “water scarcity”.   Imagine water scarcity being a thing of the past.

Water desalinization plants already exist around the world (and on cruise ships) but can be resource intensive, though some advances have been made to reduce the energy required to produce potable water.

In a few years, the use of graphene could change all that and bring a regular supply of fresh water to millions who need it with a minimal energy requirement.  Wouldn’t that be wonderful?

Internet users in the US may soon find their internet browsing history being sold for ‘marketing purposes’. 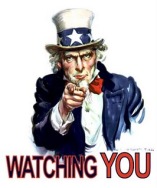 President Trump is soon expected to sign an order that repeals a law that stated ISPs (Internet Service Providers) must first have your permission before sharing your browsing history, including location data. The major ISPs in the US support this move arguing they are subject to stricter controls than the likes of social media giants like Facebook. Other supporters of the change claim it will increase competition.

Not surprisingly, privacy campaigners are not happy. What would you do if you learned your internet browsing history was sold to the highest bidder?

One of the more persistent hoaxes floating around the internet is the ‘reverse PIN’.  It claims that entering your PIN in reverse at a bank machine (or ATM) will alert the police if you’re being forced to withdraw

money.  This hoax has been doing the rounds since 2006.

It’s NOT true.  If you see someone sharing this hoax email or a post on Facebook and they refuse to believe it’s false, ask them this:

What if your PIN is 8118 or 7777 or 3223?  Those are the same forwards and backwards.  If this hoax was actually true, then banks would not allow you to have ‘palindromic’ PINs.  If they did that, many PIN combinations would not be permitted and it would be far easier to crack.

Those are the same forwards and backwards.  If this hoax was actually true, then banks would not allow you to have ‘palindromic’ PINs.  If they did that, many PIN combinations would not be permitted, thus making the system less secure.

The actual concept of entering your PIN in reverse has been discussed in the past but it has never been implemented anywhere.

It would be unlikely to work anyway.  How many people with a gun pointed at them would be able to easily remember their PIN, let alone what it is in reverse?  In addition, if the police were alerted, by the time they got to that location, the criminal would be long gone.

Keeping your PIN safe is extremely important.  When you are at a bank machine or purchasing something in the shops, be sure you shield the keypad from prying eyes.  Be aware of your surroundings and look for anything unusual that might be attached to the bank machine.  Card readers and small cameras can be attached to steal your PIN.  If you’re not sure, don’t use it.  Go into the bank and let them know.

Finally, if you ever see your friends share this reverse PIN hoax, be sure to let them know it is not true and give them a link to this post or simply use Google and search a phrase like “is the reverse PIN story true” – you’ll have your answer very quickly.

Social media goes into overdrive during large-scale events – whether that’s a sporting match, a natural disaster or a terrorist attack.  It can be of tremendous help, but it can also cause problems.

The speed of the internet allowed up to the minute details of yesterday’s attack in London to be quickly broadcast.  It also meant individuals were able to let their loved ones know they were safe.  Using the internet to do that can be faster and more effective than calling or texting as the ‘bandwidth’ for the voice calls will be needed by emergency responders.

The downside: it also allows the easy sharing of rumours and speculation.  That can lead to confusion and the wrong people being identified.  That turns into witch hunts, and ruins lives, both the accused and the accusers.  In the recent past, people have been prosecuted for spreading ‘witch hunt’ type rumours over the internet.

When terror attacks happen, it’s all too easy to let your heart lead instead of your head.  You’ll find pages on Facebook specifically set up to take advantage of this.  Clickbait sites can quickly gather followers and popularity by posting images that speak to your emotions.  “Share this photo to show respect / catch the killer” is a common approach.  They tug at your heartstrings and hope you’ll share it without a second thought.

That is exactly what they want.  It leads to false information being spread, the vilification of specific groups of people and of course it raises that page’s profile.  Clickbait pages can take you to other suspect sites, generating revenue for them, and could compromise your profile information.

A good example: the right-wing group, Britain First has been using the image of the murdered soldier, Lee Rigby, on its social media platforms to further their cause. This is in spite of repeated requests from his family to stop using his name and image to fuel their agenda.

Even high-profile media sources can get it wrong sometimes. So unless you’re 100% certain you can trust the source (and maybe verify elsewhere), just scroll on by and don’t share the information.

Buzzfeed has published an article about the misinformation spreading online about this attack which is worth a read.

In distressing times, don’t let the bad guys win, you could be doing more harm than good.

How many times have you clicked “LIKE” today? How about those other ‘reactions’ like LOVE, HAHA, WOW, SAD or ANGRY?

Those extra reactions are now one year old and until a few days ago clicking on them was no different than clicking on LIKE, but no more. Very soon, Facebook will be adding extra ‘weight’ to those reactions to determine the sorts of things you see on your News Feed. Normally when you “LIKE” something, Facebook decides that you want to see more of that type of content. Soon if you click LOVE or ANGRY, you may see more of those too. Just remember, everything you do on Social Media has a consequence even it’s not obvious.

Learn more about the reactions from Mashable.