One of the more persistent hoaxes floating around the internet is the ‘reverse PIN’.  It claims that entering your PIN in reverse at a bank machine (or ATM) will alert the police if you’re being forced to withdraw

money.  This hoax has been doing the rounds since 2006.

It’s NOT true.  If you see someone sharing this hoax email or a post on Facebook and they refuse to believe it’s false, ask them this:

What if your PIN is 8118 or 7777 or 3223?  Those are the same forwards and backwards.  If this hoax was actually true, then banks would not allow you to have ‘palindromic’ PINs.  If they did that, many PIN combinations would not be permitted and it would be far easier to crack.

Those are the same forwards and backwards.  If this hoax was actually true, then banks would not allow you to have ‘palindromic’ PINs.  If they did that, many PIN combinations would not be permitted, thus making the system less secure.

The actual concept of entering your PIN in reverse has been discussed in the past but it has never been implemented anywhere.

It would be unlikely to work anyway.  How many people with a gun pointed at them would be able to easily remember their PIN, let alone what it is in reverse?  In addition, if the police were alerted, by the time they got to that location, the criminal would be long gone.

Keeping your PIN safe is extremely important.  When you are at a bank machine or purchasing something in the shops, be sure you shield the keypad from prying eyes.  Be aware of your surroundings and look for anything unusual that might be attached to the bank machine.  Card readers and small cameras can be attached to steal your PIN.  If you’re not sure, don’t use it.  Go into the bank and let them know.

Finally, if you ever see your friends share this reverse PIN hoax, be sure to let them know it is not true and give them a link to this post or simply use Google and search a phrase like “is the reverse PIN story true” – you’ll have your answer very quickly.

If you’ve ever used a computer in an office environment, at some point you will have called IT support. It’s almost certain your IT support staff suggested ‘turning it off and on again’ – otherwise known as rebooting or restarting.

“Have you turned it off and on again” was turned into a catchphrase thanks to the “IT Crowd” comedy series.  When  IT staff ask clients to do this, it’s usually met with a roll of the eyes and an exasperated comment such as “you guys always say that”! 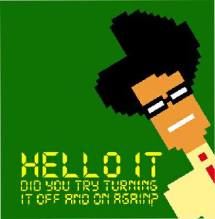 It is true, it’s a common request from IT support, but why is that?

I would often ask my clients how often they restarted their computer during the week.  I’d say about 75% never did.  Some simply logged off, some locked their computer, and others just left their desk and relied on the computer to “lock itself” after a set period of time (that made our IT security people freak out!).  Ideally at the end of the day you should restart your computer so it’s  in a ‘fresh state’ for the next day.

Most computer problems have a known cause and a known solution.  However, it’s when a computer does very unexpected or weird things that, in my experience, a good place to begin troubleshooting is with a restart.

A computer that has been “on” for a week is essentially “tired” and getting cranky.

Imagine if you were expected to stay awake for 24 hours, or 48 or 72, or an entire week.  You’d be a total mess and unable to perform even the most basic tasks effectively.  Once you’ve had a good nights sleep, you’ve ‘reset’ your body and you’re good to go again for the day.

A computer is the same – as time goes on, more and more resources are used.  In a perfect computer, all the resources or “memory” used to run a piece of software should be released and available again when it’s closed.  That isn’t the case.  Eventually these ‘leftovers’ start to slow down your computer and eat up memory.  It becomes sluggish, and does odd things.

A full restart (NOT just logging off) will release those resources, reset everything and give it a fresh start, just as if you had a nice long sleep and woke up refreshed.  All those resources are now free to be used again.

It’s a very quick solution to most problems which is why your IT staff often suggest this as a starting point.  If the issue goes away then great. If not, then of course they will investigate further and do their best to fix the problem for you.

Restarting can be used to fix almost any piece of IT or electronic equipment as they all have some sort of operating system running software.  So if you find your smart phone, e-reader, cable box or router acting slow, a restart should be the first thing you try.